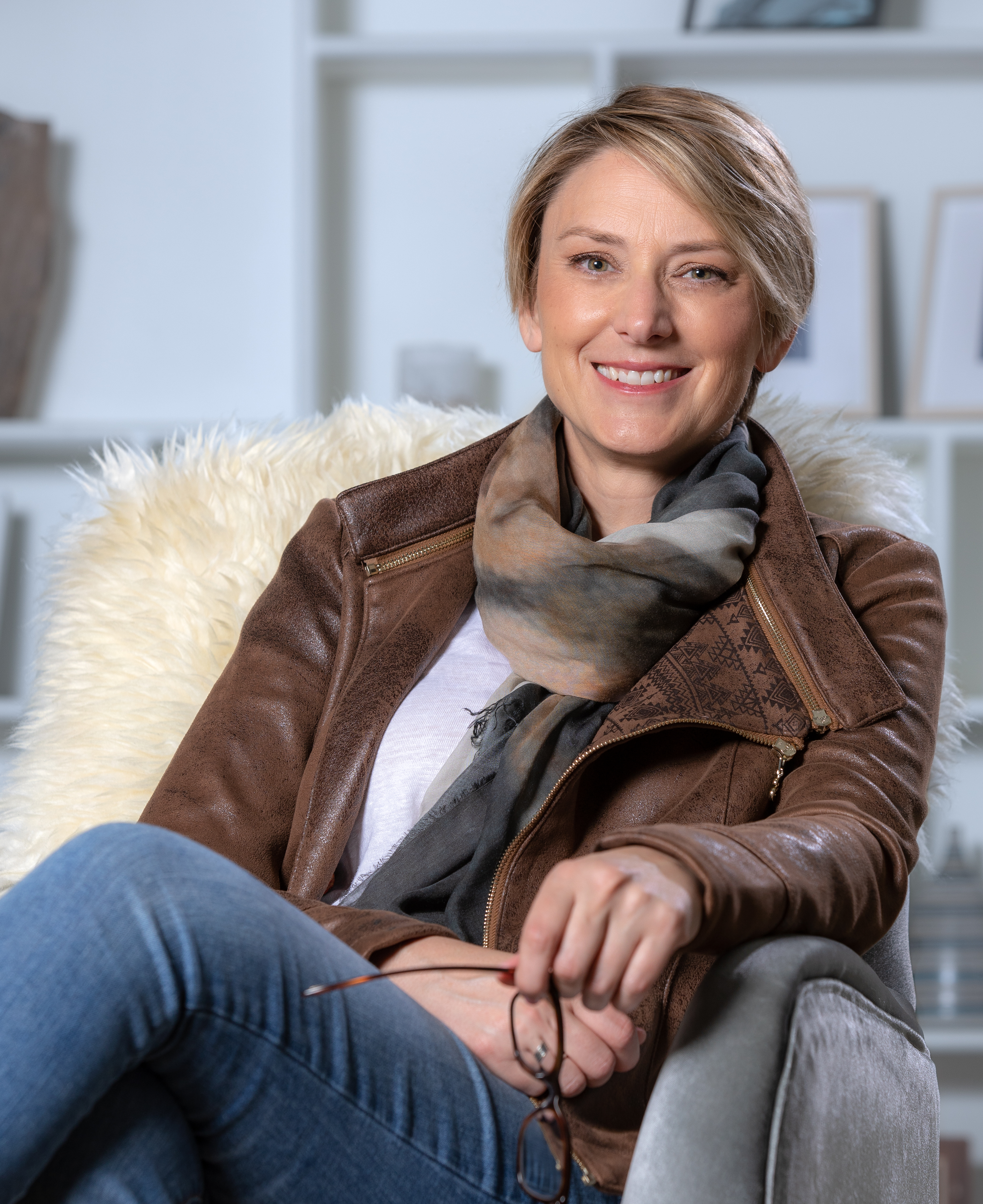 A revolution is happening above our heads as companies race to take advantage of what is quickly becoming a precious resource, Earth's orbit. A few years ago, satellites were the size of garbage trucks and cost $400M. Today, cubesats the size of a loaf of bread are an economical $1M or less. This thriving ecosystem has additionally lowered cost and technology barriers of entry with launch and on-orbit services bringing entrants to market faster than ever. Of the $250B in investment over the last decade, more than half was secured since 2018.

Alongside this unprecedented growth, society continues to place its future and safety in the hands of the space community. We rely on satellite technology everyday. Satellites help us find our way home, let us binge watch our favorite shows, and protect us from domestic and foreign attack. And, the use cases for space continue to expand. The space economy is now home to mega-constellations that aim to provide global internet connectivity, ambitious space tourism programs, and fleets of Earth observation satellites that can help us understand and protect our world.

Earth’s orbit offers huge opportunities for innovation and profound advances that could shape the future of humanity. But the situation is growing increasingly complex for satellite operators to protect these precious assets. Not only are the number of satellites in orbit planned to increase exponentially the next decade, space is also cluttered with 10,000 metric tons of fast-moving debris. The chance of a collision has never been higher. As satellite operators face more risk and less time to take action, they desperately need access to better data and a faster way to coordinate and share information to avoid collisions that put the entire space community in harm’s way.

An Exponential Rise in Conjunctions

Operating in Low Earth Orbit (LEO) is a high stakes endeavor. It is the most congested orbit with thousands of satellites and millions of pieces of debris flying at speeds of 17,000 miles per hour. At this speed, these objects are making their way around the globe every 90 minutes. And, new objects are added into the equation all the time.

Since 2018, there have been 11 major debris generating events. The most recent was a Russian ASAT test, which sent thousands of Kosmos 1408 fragments of debris into LEO, forcing the International Space Station crew to take evasive action.

And there’s plenty more to come: FCC and ITU filings suggest the number of satellites in orbit will increase by a factor of 25 in the next decade. SpaceX’s Starlink constellation will have 12,000 satellites by the time they are finished. Other companies appear even more ambitious with some shooting to launch mega-constellations with satellites numbered in the tens of thousands.

All of this activity is driving an exponential rise in the number of potential collisions between objects in orbit.

Today, the U.S. government serves a vital role in monitoring the space environment and determining whether two objects have a likelihood of conjuncting. The 18th Space Control Squadron (18 SPCS), located on the central coast of California at Vandenberg Air Force Base, leverages a global network of radar telescopes to track space objects on a daily basis and provide the operator community–both domestic and international–with information about the risks posed to their assets.

The 18 SPCS scans the skies multiple times a day. They take these radar observations and forecast which objects are likely to have a conjunction that may warrant a maneuver over the next few days. Once a potential conjunction passes a certain probability threshold, they generate warnings called Conjunction Data Messages (CDMs) that are sent to operators who sign up for these free alerts.

The 18 SPCS currently generates more than 500,000 of these warnings every single day. For the 800 or so satellite operators with equipment in orbit, it’s no exaggeration to say the status quo is unsustainable.

With every satellite launch, Earth’s orbit becomes more dynamic and precarious. In 2019, a defunct Soviet satellite and an eight-ton Soviet rocket body avoided colliding by just ninety-five yards. The resulting debris would have doubled the amount of tracked debris in LEO; meaning this single event would have been on par with sixty years’ worth of space-debris growth.

For the space-based economy to safely continue on this path, operators have to find a better way to assess risk and coordinate with each other.

Collision Avoidance in the Age of Mega Constellations

Much of this assessment and coordination is currently conducted in a manner that undermines the ingenuity of the industry and its operators.

Depending on the number of assets under your control, thousands of CDMs can arrive each day via email or through an in-house API. Judgements then have to be made on which are high risk enough to warrant an expensive and disruptive maneuver.

These decisions are often based on limited, low-fidelity data. The result can be an uninformed course of action with potentially ruinous consequences. A case in point is the February 2009 collision between an active Iridium satellite and a defunct Russian military satellite - despite calculations predicting the two would miss each other by almost 2,000 ft.

For CDMs involving two stakeholders, the lines of communication are also antiquated. A high-risk conjunction report can lead to a chain of emails while operators resolve the issue and decide who will do what. And that’s assuming you’re able to get in touch with the relevant counterparty.

With more infrastructure being sent into orbit, limited space awareness across the board represents a significant risk to every operator. There are too many manual processes, barriers to effective communication between stakeholders, and vital operational decisions being made with low fidelity data.

Fortunately, there’s a better way. It starts with higher quality data, improved CDM processing, and seamless communication between stakeholders. These are the foundations operators need to increase certainty around conjunction outcomes and reduce the number of maneuvers required.

We ingest and filter the daily avalanche of CDMs and facilitate direct collaboration between space stakeholders. Conjunctions that meet predefined criteria are highlighted, while mission plans, timelines, and constraints are shared with all the relevant parties.

The result is a platform that de-risks conjunctions, fosters a more sustainable approach to operations, and saves satellite owners valuable time. 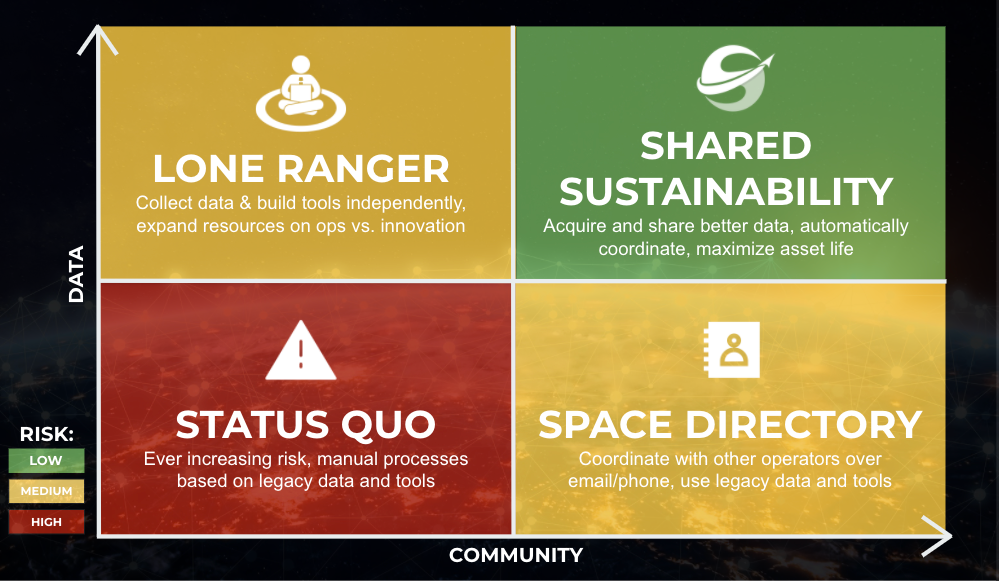 We can use this chart to look at the situation and how to reduce the risk. On the x-axis we move across the community spectrum, from a single, siloed player to one that is more interconnected with the broader community. On the y-axis, we move from poor and incomplete data, to more accurate, more timely and more complete data. The ideal, and lowest risk quadrant is in the upper right, what we call Shared Sustainability. Here, rich and accurate data is combined from multiple sources. Sophisticated solutions help operators filter the signal from the noise and everyone in this bucket is part of Slingshot’s connected community, allowing for simple and timely coordination.

As commercial, scientific, and military capabilities in orbit scale up, it’s useful to think of space awareness across two spectrums: data depth and data sharing.

Even when the data can be trusted, the current level of information sharing between satellite operators is far from ideal. Information silos and standalone processing methods are remnants of the industry’s early years. Both reduce interconnection within the space community and add friction where there should instead be a shared approach.

Slingshot Beacon includes several collaboration features that push the industry towards a status quo of Shared Sustainability. These include the option of one-to-one contact, community broadcast channels, and a step-by-step CDM resolution process built on the transparent exchange of data.

It Pays to Work Smarter

The bottom line for operators is that every maneuver comes at a cost. The lifespan of a satellite depends on the efficient use of fuel, while service disruption caused by evasive action can be, well, disruptive.

With rich and accurate data from multiple sources, Slingshot Beacon allows operators to filter the signal from the noise, easily coordinate with each other, and only maneuver when absolutely necessary.

Slingshot Beacon is here to mitigate risk in orbit and enable safer satellite operations for all. Learn more here.

Looking Ahead to the Space-for-Space Economy