Risk Aversion and Space: Getting Over the Fear of Failure

Written By
Erik Till
Topic
Space

With Virgin Galactic and Blue Origin conducting successful test flights into orbit in July, the recent launch of the all-civilian Inspiration4 mission by SpaceX, as well as other exciting news in the commercial space industry, it’s beginning to feel as though space is open for business. The commercial ambitions of Richard Branson, Jeff Bezos, and Elon Musk are at the forefront of efforts to turn space into a sustainable economic frontier.

A New Economic Frontier in Orbit and Beyond

When SpaceX became the first private company to send humans into space in May 2020, the launch was symbolic of a long-term shift. The days of national space agency programs providing the only feasible route into orbit are now behind us. NASA’s funding has steadily decreased as a proportion of the federal budget since the 1960s. And although the agency’s leadership, innovation, and influence remain vital, significant opportunities and incentives for commercial ventures exist.

A handful of billionaire entrepreneurs are jostling for position ahead of a predicted boom in space tourism. Manufacturing, mining, in-orbit services, and even microgravity biotech experiments all look set to become established industries within the new space economy. As private firms launch more people and technology, a ‘space-for-space’ economy that meets the demand those efforts create is on the horizon.

Space agencies always balance risk tolerance and budgetary constraints when making plans and managing programs. The private sector’s increased appetite for risk and substantial capital is shaping the future of the commercial space market, which in turn will affect military responses in the domain.

Using Failure as an Advantage

Space is a uniquely challenging domain. The laws of physics we take for granted on Earth become dynamic elements to be contended with and accounted for to operate safely in space. It’s also an incredibly complex, expensive, and dangerous place to operate. All of this explains why a handful of high-profile incidents contributed to a shift in the scope of NASA’s remit, as well as a global approach now defined by openness and collaboration.

The Challenger and Columbia shuttle disasters in 1986 and 2003 are two of the most tragic events in US space history. Both led to a rethink of NASA’s budget, mission scope, and approach, and were eventually catalysts for a more decentralized approach to space.

The commercialization of space is a result of technological advances too. A 2004 President’s Commission on Implementation of United States Space Exploration Policy stated that “NASA’s role must be limited to those areas where there is irrefutable demonstration that only government can perform the proposed activity.” With industry partners rapidly developing solutions – particularly for missions in orbit – and NASA’s commitment to open innovation, the shift was inevitable. 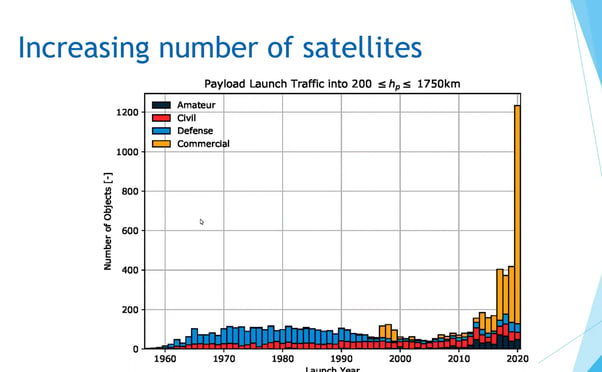 Image from Dr. Brian Weeden's presentation with AIAA on 'The Urgency to Act on Space Traffic Management'

There’s also a sense that the private sector has a more nuanced approach to the risks that come with space operations. Heavily scrutinized government agencies aren’t known for being centers of innovation, particularly if the domain is one in which failures and mishaps are often a necessary part of the journey. The esteemed NASA flight director Gene Kranz entitled his memoir Failure is Not an Option. That approach successfully delivered the Apollo program, but it arguably didn’t prove to be a sustainable culture for the long term.

In contrast, during a 2005 interview, SpaceX founder Elon Musk offered an alternative perspective: "There's a silly notion that failure's not an option at NASA. Failure is an option here. If things are not failing, you are not innovating enough." Indeed, SpaceX’s willingness to fail spectacularly as the world watches has been a defining feature of the company’s journey.

Industry observers suggest that “NASA tries to model everything to the nth degree whereas SpaceX works on the basis of ‘test it until it breaks’”.

For SpaceX and its reusable rockets, every failed landing and dramatic explosion has been an invaluable lesson. Setbacks are overcome, issues are resolved, and development timelines are accelerated. Of course, this approach is helped by advances in analytics and rocket technology. A raft of sensors allows engineers to closely monitor every event to identify the root causes of accidents. But there’s also a sense that conducting a high frequency of attempts and taking more risks helped the company discover and deploy fixes faster.

Advances in remote piloting and the proliferation of that technology helped to make those tests as safe as possible. As a result, the main risk factors for private companies (i.e. their bottom lines) were dampened by way of deep pockets.

It’s clear that policy will continue to shape the pace of innovation and early signs are promising. The number of FAA-licensed commercial space launches went from one in 2011 to a record 39 in 2020. That 3,800% increase is on track to continue upwards this year, as the FAA has streamlined its commercial space launch and reentry licensing rule to minimize bureaucracy and support the growth of commercial space transportation.

The challenge for policymakers is to provide robust frameworks that strike the balance between safety and the risk-taking required to grow a decentralized and private-sector-driven space economy. After all, a Wild West in orbit is in nobody’s interest.

While the FAA is providing leeway for experimental space tourism programs, there’s also scope for NASA contracts to shift in a way that provides greater incentives to commercial partners and encourages the right kind of risk-taking.

To maximize the growing competition for commercial space solutions, NASA contract bids may well become increasingly competitive, with private firms sharing in the high risks and potentially high rewards of their investments in space.

The commercial space industry is taking off amid a cultural divide. This domain has traditionally been home to government agencies and defined by cautious modeling, gradual progress, and risk aversion.

As we enter the commercial space era and the dawn of a ‘space-for-space’ economy, it’s vital that innovation isn’t stifled by the fear of failure. That doesn’t mean allowing a free for all in orbit or compromising on safety standards. As always, sensible policymaking and collaboration across government, defense, and commercial interests will be key.