Demystifying the US Space Force

Ever since the first satellite was launched in the 1950s, the race to gather intelligence from Earth’s orbit has been on.

Fast-forward more than sixty years and space has become a competitive, increasingly cluttered frontier with significant strategic implications. Many do not realize it, but a lot of the services we rely upon, both as a nation and as individuals, depend on infrastructure orbiting high above.

GPS, communications, financial transactions, even weather forecasts - all require satellite technology and highlight why operations in and access to space are so important.

In December 2019, the 2020 National Defense Authorization Act was signed by President Trump. Usually, this annual legislation passes without too much fanfare. But last year the budget included one notable addition. For the first time since 1947, it formally established a new independent branch of the U.S. Department of Defense: the United States Space Force.

For some, the formation of the Space Force was contentious. But General John Raymond, the man set to lead the newly formed DoD branch, argued upon its inception that:

“This is not a farce. This is nationally critical. We are elevating space commensurate with its importance to our national security and the security of our allies and partners."

So what is the Space Force, why has it been established, and why is the US Government intent on militarizing its operations in orbit?

What is the Space Force for?

The U.S. Space Force is first and foremost a military service that operates under the umbrella of the Department of the Air Force. And for some that might be surprising. After all, the use of force in space shouldn’t be necessary. As far as we know, it’s unpopulated, apart from unmanned satellites, the International Space Station, and over 23,000 pieces of orbiting debris larger than 10 cm.

The reality is that Earth’s orbit is becoming an increasingly dynamic environment. From communications and intelligence gathering to GPS services, space has become a frontier of huge strategic importance to commercial and military operations.

As a result, the protection of American assets in orbit is at the heart of the Space Force’s stated aims.

During the NDAA signing ceremony, President Trump described space as "the world's newest war-fighting domain.” Combat in space isn’t something we’ve seen outside of science fiction and it’s not an imminent possibility. But countering nefarious activities in orbit is nonetheless an important capability for governments around the world.

There are several recent examples of aggression in space, including anti-satellite missile tests conducted by India, China, and most recently Russia - an event which caused General Raymond to conclude that such operations were “further evidence of Russia's continuing efforts to develop and test space-based systems, and consistent with the Kremlin's published military doctrine to employ weapons that hold U.S. and allied space assets at risk.”

In simple terms: High above the Earth’s surface, the tension is mounting.

The Space Force mission is to organize, train, and equip personnel to handle the threats facing the United States and its allies in space today, prepare for the inevitable challenges of the future, and, more broadly, to grow the United States military’s capabilities in orbit and beyond.

Understanding the Makeup of the US Space Force

The United States Space Force (USSF) headquarters are located at the Pentagon alongside the Army, Navy, Marine Corps, and Air Force. And, at least to begin with, the USSF will fall within the Department of the Air Force with the majority of the HQ in Colorado Springs with forces worldwide.

The capabilities the Space Force is harnessing aren’t entirely new. It will mostly bring together and expand upon existing military space operations that until now have been overseen by different departments across the Air Force, Army, and Navy. Congress has ambitions for the USSF to unify dozens of disparate space-related organizations across the military.

Prior to the US Space Force, the protect & defend and other national security missions related to space were carried out by the US Air Force Space Command. The establishment of USSF helps to gain the importance of a branch and advocate for its own resources: money, systems, and people.

The exact structure of the USSF has recently been determined, as illustrated by this chart of Space Mission Deltas: 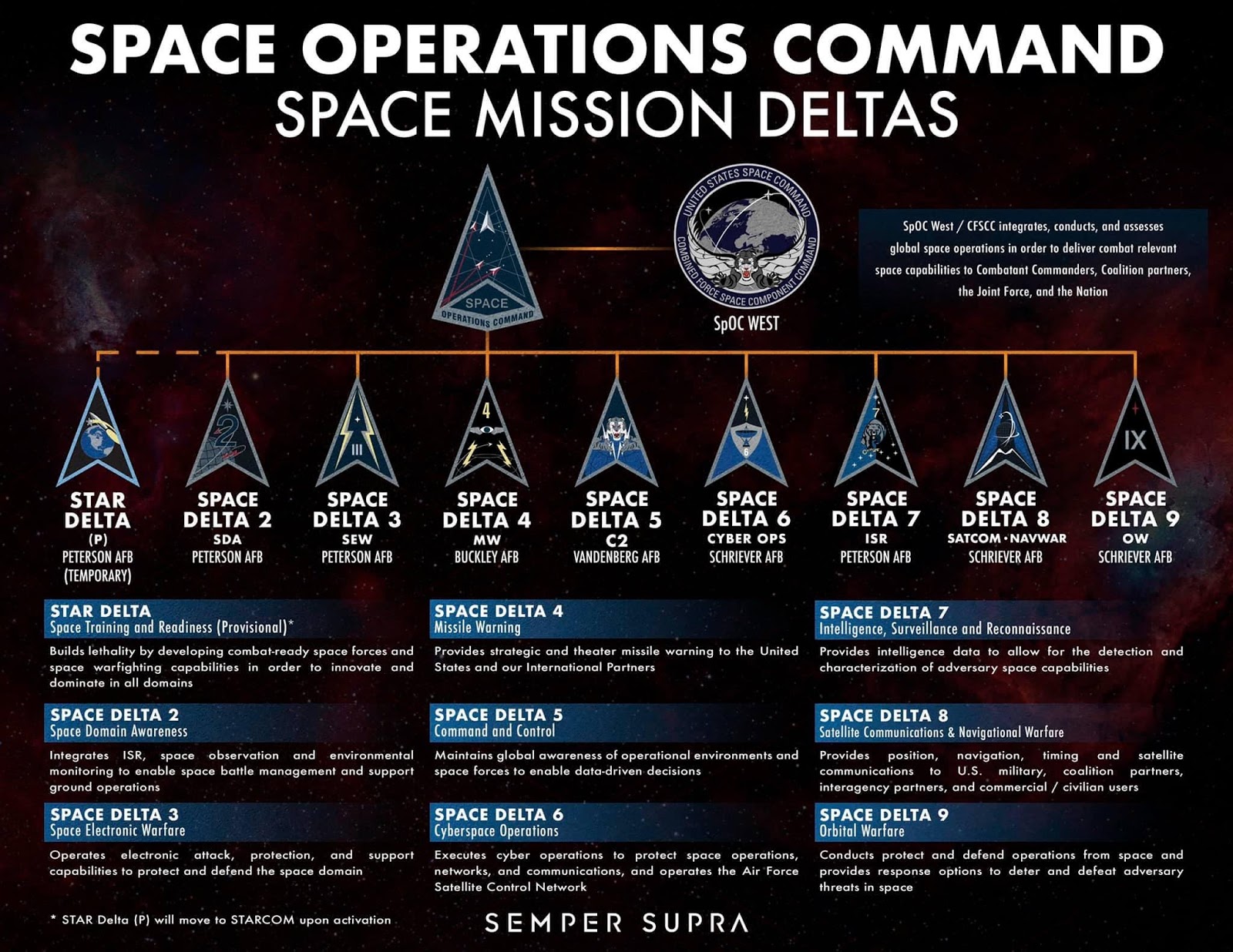 In June it was announced that the Space Force will have three distinct field commands: Space Operations Command, Space Training and Readiness Command (STARCOM), and Space Systems Command.

The first of these, Space Operations Command, will focus on the operation of the US military’s satellites, which range from GPS to missile defense systems and communications.

It’ll be based at Peterson Air Force Base in Colorado and be made up largely of the personnel and organizations from the deactivated Air Force Space Command. As of October 2020, the new unit was activated, with Lt. Gen. Stephen Whiting as the Commander.

Space Systems Command (SSC) will be the United States’ new hub for the development and acquisition of space weapon systems. It’ll take over from the Space and Missile Systems Center, the Defense Department’s commercial satellite communications office, and elements of the Air Force Research Laboratory. As you can imagine, merging different agencies and restructuring to this extent takes time.

Space Systems Command is expected to be fully operational in spring 2021. In the meantime, its various agencies continue to award contracts for new satellite systems and training tools for the Space Force personnel. One of the benefits of setting up a dedicated military branch for space operations is expected to be a reduction of the currently fragmented acquisition process.

Last but not least, STARCOM will be more than just another great American acronym. Also based at the Peterson Air Force Base in Colorado, it’ll become the gateway and training center for new Space Force recruits.

What doesn’t come under the Space Force’s jurisdiction?

It’s worth mentioning one area in which the Space Force will not be operating: exploration. Science and discovery remain the focus of NASA, while the Space Force has more defined military objectives.

Having said that, both organizations share a common domain and are expected to work closely together.

NASA had a similar agreement with the U.S. Air Force Space Command, so it’s a symbolic step rather than one that will lead to sweeping practical changes.

The difference between the two agencies is probably best understood by comparing the type of power they wield. NASA’s power is soft. The agency is an effective tool of American foreign policy with enormous diplomatic, intelligence-based, and economic influence around the world. The Space Force is the United States’ more direct attempt to expand its military strength into Earth’s orbit.

What does the future hold for the Space Force?

The next decade promises to be pivotal for US interests in space. America’s commercial space market is growing and increasingly capable. NASA’s Artemis program intends to land astronauts on the moon again by 2024, continue its pioneering lunar research, and send a manned mission to Mars.

All of this will take place against a backdrop of a second space race, in which a number of global powers maneuver in an ever-changing world and access to space and freedom of action within space can no longer be taken for granted.

General Raymond has stated that it’s not the Space Force’s role to start conflicts that begin or extend into space, but instead to be a powerful and effective deterrent.

“We are strongest when space is secure, stable and accessible to enterprising Americans for scientific, economic and security interests," he said in October 2020.

Why we’re working with the Space Force

Most of the veterans on the Slingshot team served in the USAF Space Command which paved the way for the same mission Space Force is set out to do, while advocating on the Hill for many years for its own funding to better protect and defend, and to get the FAA or some other civil branch to take on the traffic management role. Our team has a history with and deep understanding of the USSF mission.

Space Force staff will face challenges that are very different from those encountered on Earth. USSF training is set to be highly specialized as a result. Operators need an understanding of complex concepts, ranging from astrodynamics to space domain awareness.

But training on the job isn’t easy when your area of operations extends from one hundred kilometers above Earth's surface to the edge of the universe. Learning the intricacies of spacecraft operation and how to work in a dynamic orbital environment requires a different approach.

All of which explains why we’re building the Slingshot Laboratory, an immersive simulation training tool for Space Force recruits.

The Slingshot Laboratory is being developed in partnership with THE THIRD FLOOR, a visualization studio best known for bringing Hollywood sci-fi blockbusters to life, including Gravity, The Martian, and The Mandalorian.

Together we’re devising a training solution that’s engaging, interactive, and adaptable. It’ll lean heavily upon existing capabilities from the Slingshot Platform and Slingshot Orbital products and give Space Force trainees an insight into orbital mechanics and the physics underlying how objects interact in space.

We’re excited to work with the Space Force and play our part in the evolution of the latest branch of the U.S. Department of Defense.